This month, Sea Shepherd Australia is working in partnership with Anindilyakwa Land and Sea Rangers to clean up the remote beaches of Anindilyakwa, in the remote Groote Archipelago in the Northern Territory.

Located 50km off the coast of Arnhem Land, Anindilyakwa / Groote Eylandt is the third largest island in Australia. In the turquoise waters around the island exists an incredible marine ecosystem with abundant and diverse marine life.

But sadly, Anindilyakwa is also a hotspot for marine plastic pollution.

Throughout the dry season, Anindilyakwa Land and Sea Rangers carry out weekly clean-ups, removing marine plastic pollution such as thongs, toothbrushes, lighters, water bottles and plastic film from the beaches before they break up into microplastics.

This year, Anindilyakwa Land and Sea Rangers have seen a record amount of ocean plastics and "ghost nets" (lost, abandoned or discarded fishing nets) washing up on the remote coastline of the island.

Working together, Sea Shepherd's Marine Debris Campaign crew and Anindilyakwa Land and Sea Rangers will be travelling to hard-to-reach beaches that are difficult to clean to reduce the amount of plastic on the beaches of Anindilyakwa and protect marine and birdlife.

Located 50km off the coast of Arnhem Land, Anindilyakwa / Groote Eyelandt is the third largest island in Australia.

In 2006, the Groote archipelago was declared an Indigenous Protected Area. Covering ten thousand square kilometres, this remote region is home to many species of threatened plants and animals. Owing to its outstanding conservation value, the Northern Territory Government has recognised Anindilyakwa as a site of International Conservation Significance.

Around the island, the marine environment is close to pristine. Here you will find many species of marine animals including dugongs, crocodiles, turtles and manta rays. The island's beaches are also home to the Northern Territory’s largest nesting colony of Hawksbill Turtles. Hawksbill Turtles are classified as critically endangered by the IUCN (the global authority on the status of the natural world) with only approximately 8,000 nesting females left globally.

Sadly, Anindilyakwa is also a hotspot for marine plastic pollution. On the beaches, high numbers of ghost nets and discarded fishing gear can be found, as well as other consumer plastics that wash ashore.

Throughout the dry season, Anindilyakwa Land and Sea Rangers carry out clean-ups every week, removing marine plastic pollution such as thongs, toothbrushes, lighters, water bottles and plastic film from the beaches before they break up into microplastics.

Follow along with our 2022 clean-up campaign at Anindilyakwa by reading our updates from the field from Sea Shepherd Australia’s Remote Marine Debris Campaigner, Grahame Lloyd, below. 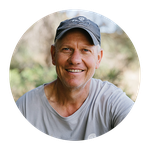 Update One - Arrival on Anindilyakwa

This week our Sea Shepherd Australia - Marine Debris Campaign crew arrived on Anindilyakwa, which marks the beginning of a new partnership with the Anindilyakwa Land & Sea Rangers.

We are joining forces to fight against the scourge of marine plastic pollution that is impacting the coastline of this stunning island in the Gulf of Carpentaria. Together the team will be cleaning up on Country to protect cultural lands and the pristine marine environment to provide a safe home for the unique and endangered marine life on this remote archipelago.

“The message stick was made by Yorta Yorta artist Ross Morgan (Morgan Art) , and is made from red gum – a beautiful, significant tree found on my Country.

I asked Ross to make this because I feel very privileged to work with the rangers on Anindilyakwa and I wanted to give them a gift from my Country to say thank you.

I wanted to present the message stick to symbolise that the issues being faced by the rangers on their Country, such as plastic pollution and rising sea levels, are not just theirs. We are here to help. We are all in this together. Yorta Yorta County is also struggling with climate change and government interference, with the natural flows of the Dhungala (Murray River) causing the Red Gums at Barmah to struggle. We are here because of man’s lack of understanding of how to manage the resources of our planet effectively. The world could learn so much from our cultures about sustainability and respectful use of Country if it would only stop this mad rush to destruction. As we say in our welcome to country Respect all you see! The environmental issues facing our lands are global and not caused by the local mob’s impact.

The symbols on the message stick are as follows – the obvious one is our Totem, the long neck turtle. Our Totem represents family and is our guide and protector. The turtle also represents a healthy waterway (something we are working to do with the clean-ups). I think it’s cool that we are cleaning beaches so that sea turtles can lay their eggs. The decorations at the end of the stick are decorated in the typical Yorta Yorta hatch (we don’t traditionally have dots). The Elders represented on the stick are sitting around a water hole to discuss elder matters. Lastly, the circles represent the importance of healthy waterways for life such as Dookie lake and Dhungala (Murray River).”